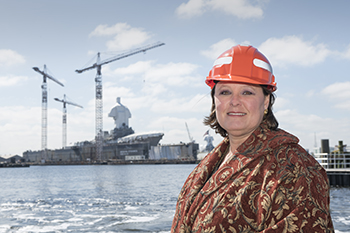 In early March, 18 women gathered for the first week of a pre-apprenticeship program designed to catapult them into in-demand careers in the ship repair industry.

Then the COVID-19 outbreak intervened, forcing the program to postpone classes until it’s safe to gather again.

In the meantime, says Virginia Career Works Deputy Director Latonya English, her team is fine-tuning the program and taking applications for future courses. They’re also staying in touch with the eight women who were part of the first class, seven of whom are currently employed in the ship repair industry in Hampton Roads. Most came from the restaurant and hospitality industries, which have laid off tens of thousands of local workers. “One of the things that made us sit back and think is how important this is for women,” especially in terms of job security, English says.

“What we’re doing is total wraparound services,” says Karen Miller, program coordinator of the Apprenticeship Institute at Tidewater Community College, where the program is based.

Last June, Miller attended a seminar about labor shortages in Hampton Roads, where the topic du jour was the lack of skilled workers to fill jobs in the ship repair industry.

“I’m sitting there, looking around the room, thinking, ‘How come nobody’s talking about women?’” says Miller, who soon applied for a grant from the U.S. Department of Labor. WISC received a $500,000 grant, allowing the group to launch the program in January.

Bill Crow, president of the Virginia Ship Repair Association, met with executives in the industry to see whether they’d help with training and later consider the program’s graduates for jobs. “They were all champing at the bit to do that,” he says.

Women who learn a skilled trade, Crow stresses, will have little trouble finding employment in the ship repair industry. “It’s a very rewarding industry,” he says. “It’s something that they will be able to take enormous pride in and, in the process, make darn good wages.”

The first cohort of eight students included Nikki Ruffin, a 33-year-old mother of four daughters. In the early weeks of WISC, Ruffin learned about topics such as financial literacy, while brushing up on her writing and math skills. She earned a certification in Emergency First Response and took Occupational Safety and Health Administration training. Later, classes moved to TCC, where Ruffin learned to weld.

The stipends allowed Ruffin to quit her job as a medical assistant and certified nursing assistant, since her work conflicted with the classes.

For Ruffin — who spent years trying to evade her abuser, now behind bars — the emotional support she received from WISC’s organizers and her fellow students was every bit as essential as the financial assistance. “We all helped each other out,” she says.

Since finishing WISC, Ruffin has received multiple job offers and she will likely start as a welder’s helper until welding apprenticeship classes start. Her dream is to be an underwater welder. First, though, Ruffin needs to learn how to swim. “Hopefully when the Y opens up, I can work on it,” she says, laughing.

Her daughters, like the women in her class, have been supportive of her career change and are rooting for her and her fellow WISC students, Ruffin says. “We all pitch in together and give each other encouraging words. … They’re really good women.”

When health officials announced in mid-March that community transmission of the novel coronavirus was happening in the United States, a group of Hampton Roads business and workforce leaders sensed it was going to have a profound effect on the regional…
END_OF_DOCUMENT_TOKEN_TO_BE_REPLACED
12 May

NORFOLK, Va. – With unemployment rates so high and many businesses closed, finding a job right now is tough. That’s why the Hampton Roads Workforce Council is holding a series of virtual workshops for people looking for jobs. The online sessions are…
END_OF_DOCUMENT_TOKEN_TO_BE_REPLACED
05 May

In early March, 18 women gathered for the first week of a pre-apprenticeship program designed to catapult them into in-demand careers in the ship repair industry. Run by the Hampton Roads Workforce Council, the 12-week, intensive Women in Skilled Careers (WISC)…
END_OF_DOCUMENT_TOKEN_TO_BE_REPLACED
13 Apr

Over the last couple of years, industry, economic, and education entities have worked collaboratively — focusing efforts on ensuring a highly trained workforce, improving the talent pipeline, and tackling the skilled trade shortage. However, confronted with the COVID-19 pandemic, the…
END_OF_DOCUMENT_TOKEN_TO_BE_REPLACED
22 Mar

Resources and updates for businesses and workers in Hampton Roads

HAMPTON ROADS, Va. (WAVY) – Many business owners and workers are struggling to keep up during the coronavirus shutdown.  In an effort to help smalls business owners affected by the virus within the Commonwealth of Virginia, Governor Ralph Northam requested…
END_OF_DOCUMENT_TOKEN_TO_BE_REPLACED
22 Mar

NEWS Workforce council working to help people getting laid off, furloughed due to coronavirus pandemic

NORFOLK, Va. – Jeff Reynolds just got laid off on Thursday. He said he was part of a paint job at a hotel that got stopped. He drove over to the Virginia Career Works Center in Norfolk, but the doors…
END_OF_DOCUMENT_TOKEN_TO_BE_REPLACED